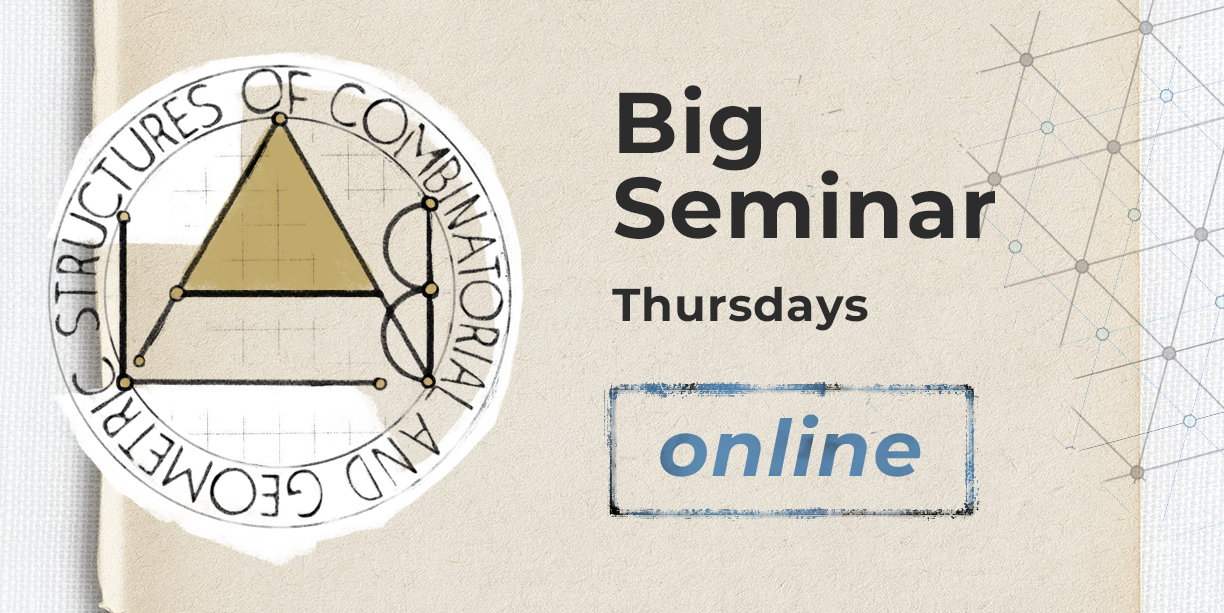 Big Seminar by Laboratory of Combinatorial and Geometric Structures is the series of talks by invited speakers. The seminar aims to expose various works and topics connected to discrete mathematics. From April 23 Big Seminar's talks are in English.

You can also write a letter to Alexander Polyanskii (alexander.polyanskii@yandex.ru) or Maksim Zhukovskii (zhukmax@gmail.com) if you want to be added to the mailing list.

Seminar page on the MathNet

Seminar page on the MathSeminars.org

This is joint work with Susanna de Rezende, Or Meir and Jakob Nordstrom.

Given a collection of finite sets $A_1,..., A_n$ in $\{1,\ldots,n\}$, a basic problem in combinatorial discrepancy theory is to find a colouring $f : \{1,\ldots,n\} \rightarrow \{ \pm 1 \}$ so that each sum \[\left| \sum_{x \in A_i} f(x) \right| \] is as small as possible. I will discuss how the sort of combinatorial and probabilistic reasoning used to think about problems in combinatorial discrepancy can used to solve an old conjecture of J.E. Littlewood in the area of harmonic analysis.

This talk is based on joint work with Balister, Bollobás, Morris and Tiba.

There'll be no Big Seminar talk on August 20. We will announce the next talk very soon, stay tuned!

There are great Bachelor's and Master's programmes at MIPT in Combinatorics and Theoretical Computer Science in English. For more details, take a look at the link below.

In this talk I am going to discuss a well-known connection between lattices in $\mathbb{R}^d$ and convex polytopes that tile $\mathbb{R}^d$ with translations only.

My main topic will be the Voronoi conjecture, a century old conjecture which is, while stated in very simple terms, is still open in general. The conjecture states that every convex polytope that tiles $\mathbb{R}^d$ with translations can be obtained as an affine image of the Voronoi domain for some lattice.

A covering system of the integers is a finite collection of arithmetic progressions whose union is the set $\mathbb{Z}$. The study of these objects was initiated by Erdős in 1950, and over the following decades he asked a number of beautiful questions about them. Most famously, his so-called "minimum modulus problem" was resolved in 2015 by Hough, who proved that in every covering system with distinct moduli, the minimum modulus is at most $10^{16}$.

In this talk I will present a variant of Hough's method, which turns out to be both simpler and more powerful. In particular, I will sketch a short proof of Hough's theorem, and discuss several further applications. I will also discuss a related result, proved using a different method, about the number of minimal covering systems.

We answer this question by a careful second moment argument, and discuss some open problems and cautionary examples for the general case.

After reviewing classical proofs, applications and generalizations, our central problem is to see how this bound changes with additional conditions.

We show connections to perfect graphs, clique partitions of graphs, and finite geometries. Many problems are proposed. Most new results is a joint work with A. Gyárfás and Z. Király.

We generalize the Guth-Katz joints theorem from lines to varieties. A special case of our result says that N planes (2-flats) in 6 dimensions (over any field) have $O(N^{3/2})$ joints, where a joint is a point contained in a triple of these planes not all lying in some hyperplane. Our most general result gives upper bounds, tight up to constant factors, for joints with multiplicities for several sets of varieties of arbitrary dimensions (known as Carbery's conjecture). Our main innovation is a new way to extend the polynomial method to higher dimensional objects.

Our results improve and generalize previous bounds by Bárány and Füredi (1987), Valtr (1995), Fabila-Monroy and Huemer (2012), and Fabila-Monroy, Huemer, and Mitsche (2015). Joint work with Martin Balko and Manfred Scheucher.

We prove that the number of directions determined by a set of the form A × B ⊂ AG(2,p), where p is prime, is at least |A||B| − min{|A|,|B|} + 2. We are using the polynomial method: the Rédei polynomial with Szőnyi's extension + a simple variant of Stepanov's method. As an application of the result, we obtain an upper bound on the clique number of the Paley graph.

Based on joint work with Daniel Di Benedetto and Ethan White.

Let $G=C_n\times C_m$ be a toroidal grid (that is, 4-regular graph), where $nm$ is even. We prove that this graph $G$ is 3-choosable. We also prove some more general results about list colorings of direct products. The proofs are algebraic, the starting point is Alon — Tarsi application of Combinatorial Nullstellensatz, and the main difficulty is to prove that the corresponding coefficient of the graph polynomial is non-zero.

The talk is based on joint results with Alexey Gordeev, Zhiguo Li and Zeling Shao. No preliminary knowledge is required.

Estimating the number of independent sets of regular graphs is in the center of attention recently.

The classical result of Korshunov and Sapozhenko in 1983 counts the number of independent sets in the hypercube, and then shows that typical independent sets are not far from the trivial construction. The main focus of the talk to prove similar results for the middle two layers of the hypercube.

We develop novel techniques which allow us to prove a diverse range of results relating to subset sums and complete sequences of positive integers, including solutions to several long standing open problems. These include: solutions to the three problems of Burr and Erdös on Ramsey complete sequences, for which Erdös later offered a combined total of 350 analogous results for the new notion of density complete sequences; the answer to a question of Alon and Erdös on the minimum number of colors needed to color the positive integers less than $n$ so that $n$ cannot be written as a monochromatic sum; the exact determination of an extremal function introduced by Erdös and Graham and first studied by Alon on sets of integers avoiding a given subset sum; and, answering a question of Tran, Vu and Wood, a common strengthening of seminal results of Szemerédi-Vu and Sárközy on long arithmetic progressions in subset sums.

Based on joint work with David Conlon and Huy Tuan Pham.

We start from the following question:

What is the maximal number of subsets of a given finite set such that no one subset is covered by t others?

We present the history of this problem which was discovered under different names in group testing, coding theory and combinatorics. We consider variations of the problem, in particular, Renyi-Ulam search with a lie. Then we embed the problem into more general question: How to find unknown subset of a finite set?

The extremal number ex(n, H) of a graph H is the largest number of edges in an n-vertex graph containing no copy of H. In this talk, we will describe some of the recent progress that has been made on understanding this question in the difficult case when H is bipartite.

The classical hypercontractive inequality for the Boolean hypercube lies at the core of many results in analysis of Boolean functions. Though extensions of the inequality to different domains (e.g. the biased hypercube) are known, they are often times quantitatively weak, making them harder to apply.

We will discuss new forms of this inequality and some of their consequences, such as qualitatively tight version of Bourgain's sharp threshold theorem, as well as a variant that applies for sparse families. Time permitting, we will also discuss applications to two problems in extremal combinatorics: the (cross version) of the Erdos matching conjecture, and determining the extremal size of families of vectors in $\{0,1,...,m-1\}^n$ avoiding a fixed intersection size, for $m\geq 3$.

Based on joint works with Peter Keevash, Noam Lifshitz and Eoin Long.

I'll present two tools from statistical physics, abstract polymer models and the cluster expansion, and show how they can be used in extremal and enumerative combinatorics to give very good approximations to the number of (weighted) independent sets in certain graphs. In one application we use the cluster expansion in concert with Sapozhenko's container lemma (and Galvin's generalization) to obtain new results on the weighted number of independent sets in the hypercube and their typical structure. Joint work with Matthew Jenssen.

In this talk I'm going discuss reasonable approaches for solutions to problems related to densest sphere packings in 4-dimensional Euclidean space. I consider two long--standing open problems: the uniqueness of maximum kissing arrangements in 4 dimensions and the 24--cell conjecture. Note that a proof of the 24-cell conjecture also proves that $D_4$ is the densest sphere packing in 4 dimensions.

A number of interesting problems at the interface of topology and combinatorics arise when we view r-uniform hypergraphs as (r-1)-dimensional simplicial complexes. I’ll talk about some recent developments around the Dirac and Turan problems for 3-graphs or equivalently, 2-complexes.

Based on the joint work with Mikhail Isaev from Monash University & MIPT.

The asymptotic enumeration of regular graphs, and more generally of graphs with specified degree sequences, has occupied combinatorialists for a long time. We will start with a survey of previous results, with a quick summary of the methods used. Then we will focus on the application of complex-analytic methods to degree sequences that are sufficiently dense. Next we will show how a general theorem on complex martingales can be applied to the estimation of the necessary integrals. Then we will apply a theorem of Isaev on cumulant expansions to find an asymptotic expansion for the number of regular graphs of degree at least $n^t$ for some $t>0$.